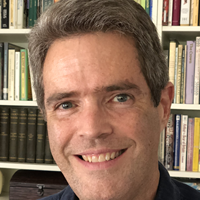 In addition, he has hosted a radio show, acted professionally (although not since age 15), designed scripts for games, written a play for a professional theatre company, taught university astronomy, and written articles on topics including mythology, psychology, technology, religion, and marketing strategy.

John sits on advisory boards/boards of directors at the Blockchain Chamber of Commerce, Invest Atlanta, and the Georgia State University Library. He served for more than four years as the Lay Leader and Council Chair at Inman Park United Methodist Church.

John Adcox is the founder and CEO of Gramarye Media, the story incubator — a disruptive book publisher, a film studio, a game developer, and more. Gramarye is the first “mini-major” studio, complete with distribution, on the east coast, and the first funded by an SEC-compliant Security Token Offering.

Gramarye Media was incubated through Georgia Tech’s prestigious Flashpoint, which advocates rigorous process for reliable innovation. Gramarye applies that same incubation approach to content innovation, building and vetting engaged audiences before a single frame of film is shot. That process, along with proprietary technology and the Georgia business environment, allows Gramarye to reduce both the risk and costs of developing original event tentpole franchises.